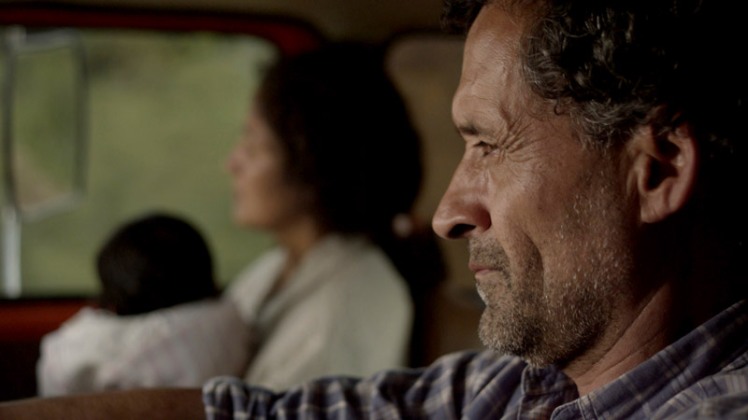 If ever a notion of writing formulated while drunk and likely brandishing a firearm sparked a radical change in the way stories are told, it would have to be Hemingway’s ‘iceberg theory.’ In an interview with George Plimpton for The Paris Review, Hemingway describes his approach as a series of well-chosen omissions:

I always try to write on the principle of the iceberg. There is seven-eighths of it underwater for every part that shows. Anything you know you can eliminate and it only strengthens your iceberg. It is the part that doesn’t show. If a writer omits something because he does not know it then there is a hole in the story.

I haven’t seen or read anything in the past few years that puts this idea to better practice than Pablo Giorgelli’s exquisite first film, Las acacias (2011). The darling of festivals from Cannes (where it won the Caméra d’Or) to London’s BFI (Best First Film), via the eight or so others that named it their Best Picture, Las acacias has been garnering its well-deserved share of critical attention. Its plot is fairly straightforward: Rubén, who drives a truck for a man named Fernando, has been told to take a load of acacia wood and a woman named Jacinta across the Paraguayan border and into Buenos Aires. He does this, and the movie ends.

Of course, what is omitted from this summary is the stuff of the film itself. Like the fact that Jacinta shows up with her five-month-old daughter, and that Rubén nearly leaves them on the side of the road once they cross into Argentina. And then, of course, there is everything that goes unsaid yet is still vitally present; despite the sparsity of the dialogue, we come to know a remarkable amount about the film’s two central figures. Without any of this being explicitly conveyed, we know that Jacinta occasionally exercises poor judgement when it comes to men, and that Rubén has long since given up on mending his broken relationship with his son. We also know that he is starting to peg his last hope for happiness on a stranger and her baby.

This kind of subtlety could never be achieved without an extraordinary cast, and Giorgelli certainly found one. Germán de Silva (Rubén) and Hebe Duarte (Jacinta) can do more with a loaded silence than most actors can wring from a carefully crafted monologue. But it’s not just their embodiment of haunted solitude (his) and world-weary solidarity (hers) that drive the emotional arch of the film: Giorgelli and his co-writer Salvador Roselli have an incredible eye for behavioral detail. This is perhaps most evident in the way Jacinta gets into and out of the truck: from the first time she does this, grappling with her bags and the heavy door while Rubén looks on impassively, to the last, as she deftly negotiates the climb and turns to receive her child from his outstretched arms, we see without needing to be told that something critical has changed. Similarly, just as we sense Rubén’s recalcitrance in his stance as he watches Jacinta approach, we know that he has begun to give himself over to the painful but restorative cocoon of his memories of fatherhood in the way he lingers – for just a moment – to let her maternal coos wash over him.

Giorgelli does an extraordinary job of translating this sense of the larger histories behind the terse exchanges and dense silences of the film into a visual register, as well. The vast majority of Las acacias unfolds within the confines of the cabin of Rubén’s truck, a claustrophobia-inducing space made even more so by the tight camera angles used to depict it. Every so often, however, we catch a glimpse of the outside world, most frequently through the vehicle’s rear-view mirrors. Now, as a nod to the power of the camera-eye to frame and reflect the world set before it, the visual symbolism of the mirror is fairly well worn. In the context of a story told through ellipsis, however, the microcosm of the rear-view mirror and the landscapes shot through the windows and cleaved by the truck’s metal frame remind us that our world, the world of the film, is but a limited part of that larger one. The vast majority of which remains hidden beneath the surface.

And those trees, which we see felled and stripped in the film’s opening shot and which then only reappear in said rear-view mirror? The mass of organic life turned into a uniform block of raw material that hints at all that it hides (the light pressing through the leaves, the tangle of branches), lingering on the muteness of its new form? Did I mention that this is Giorgelli’s first film? Go. See. It. Whatever it takes. In the meantime, I’ll be reflecting on one final question: Is it weird to say that a baby is a gifted actress?

NB: you can check out the trailer here, but be aware that it’s essentially a montage of almost all the dialogue from the movie. As such, you’ll get a sense of the plot, but not really of what’s essential to the film.