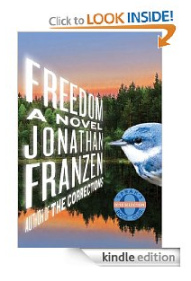 So, Jonathan Franzen held a press conference today. Though he might have been well served to hold off just a bit longer – at least until he shored up a few flaws in his logic. Speaking at the Hay, a British festival of the arts, he expressed some unsurprisingly conservative views about the long-term cultural dangers of e-books. Now, the author’s curmudgeonly tendencies are widely known and often quite well conceived (I’m thinking of his paean to the “distant pageantry of public life” in How to Be Alone, which I loved). But I think he misses the mark here, and by a wide margin.

The first of his dubious claims is that printed books somehow subvert the logic of consumerism through their “permanence,” both physical and aesthetic. In his words,

The technology I like is the American paperback edition of Freedom. I can spill water on it and it would still work! So it’s pretty good technology. And what’s more, it will work great 10 years from now. So no wonder the capitalists hate it. It’s a bad business model.

Huh? Of course, it’s easy to be chagrined at the procession of generation after generation of e-readers, and the way each minor tweak inspires so many to reflexively pull out their credit cards (or, worse yet, wait in line for the privilege of forking over hundreds for more of the same). But the printed book – despite its many charms – sort of is a bad business model, at least insofar as production goes. Deciding the print run of a book is far from an exact science – remainders are often sent back whence they came (or some of the books produced are never distributed at all), which adds up to a fairly significant waste of money. And that means less funding available for the development of future book projects. Not to mention the ecological implications of the process: even if those books are ultimately recycled, the energy that went into turning those trees to pulp to book to pulp to book was – one intuits – significantly greater than the energy required to produce and distribute an e-book.

And then there’s this:

The Great Gatsby was last updated in 1924. You don’t need it to be refreshed, do you? Maybe nobody will care about printed books 50 years from now, but I do. […] The fact that when I take the book off the shelf it still says the same thing – that’s reassuring. Someone worked really hard to make the language just right, just the way they wanted it. They were so sure of it that they printed it in ink, on paper. A screen always feels like we could delete that, change that, move it around. So for a literature-crazed person like me, it’s just not permanent enough.

It may be that Franzen will never make a single change to his work between editions, but that doesn’t mean the practice does not exist. While I agree that reading on a screen does feel impermanent / is less likely to leave a deep emotional impression / can be taxing on the eyes / etcetera, the claim that the printed book represents the ideal and absolute manifestation of the author’s aesthetic will is undone by the humble typo. And by the careful study of some of these “untouched” classics, many of which have undergone significant changes over the years according to the whims of editors and, at times, shifting notions of propriety. Which is not to say that I am not horrified by the prospect of some sort of automatic updating of my electronic library. That would be invasive, and a direct affront to the sanctity of the work. In which I do, strongly, believe. But to argue that such changes have never been made in print, or that a given edition of The Great Gatsby is somehow trans-historical, is naive at best (not to mention that it entirely ignores the question of literature in translation, which often undergoes major changes from generation to generation). At worst it’s willfully ignorant.

This is not to say that I’m a radical proponent of the e-book. Beyond the tactile pleasures and occasionally brilliant design that enrich the experience of reading a printed book, I generally prefer paper to screen, and would be horrified to live in a future without physical libraries. But I’m pretty far, geographically speaking, from my own physical library at the moment, and take comfort in knowing that I can still access (and not have to relocate) some portion of my collection. Not to mention the infinite pleasures of the many works in the public domain that have been digitized by volunteers and can be accessed for free by anyone with an internet connection (regardless of whether they own an e-reader).

As for the potentially deleterious effects of instant literary gratification, I personally read more experimentally and more broadly in the digital format. Books I’m curious, but not sure, about; non-fiction and other genres that benefit from searchability.  So perhaps the e-book does have its place, particularly if its pricing could be more closely aligned with its production costs. Perhaps in the coming years we’ll strike a balance between these two formats, one which cuts back on economic and ecological inefficiencies while consolidating the position of the printed book as both an object of aesthetic appreciation and a physical testament to those works that are most important to us. For the time being, my copy of Freedom remains comfortably nestled between Flaubert and Friedman (George, that is) on the home screen of my Kindle.

Full(er) coverage of Franzen’s press conference can be found here.