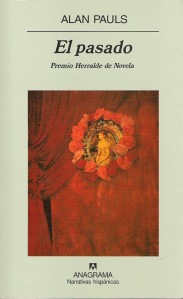 Breaking up is hard to do. For Sofía and Rímini, of Alan Pauls’ El pasado (Alfaguara 2003; translated into English as The Past in 2008), it seems downright impossible.

After nearly thirteen years together, the two part ways and Rímini sets out to make a fresh start. He moves in with a young woman named Vera and, despite her pathological jealousy (at one point she flies into a rage over a game of peekaboo with a toddler), builds something of a stable relationship with her as he throws himself with equal vigor into his translation work and the cultivation of a raging cocaine addiction.

But fate intervenes – or is it Sofía? – and Rímini’s affair with Vera comes to a crashing halt. Undeterred in his attempt to put his past behind him, he embarks on a new romance with an exceptionally talented, emotionally generous woman with whom he works. She remains at his side through his very public, and very humorous, professional fall from grace (while interpreting for Jacques Derrida, Rímini is unable to come up with the Spanish word for valise – which is the nearly identical valija, by the way – and tries to convince the philosopher that the term is untranslatable, one of the neologisms for which he is famous). They marry, and have a child. And then fate – or is it Sofía? – intervenes.

If it seems like Sofía is uncannily present in Rímini’s new life, it’s because she is. Her attempts to revive their moribund relationship escalate from phone messages to handwritten notes (a gesture carried over from their romance) to unexpected appearances at inopportune moments in Rímini’s life.

She is there when his romance with Vera meets its violent end. She is there when Rímini loses the trust of his wife and the family they had become, forever. And she is there to reclaim him when the last vestige of his new life – his life without her – slips through his fingers. She brings him back, like a trophy or the object of an anthropological investigation, into the fold of a therapy group she runs, known as The Women Who Love Too Much, where he achieves celebrity status as living proof that the excesses of emotion that grip its members can, in fact, yield results. It is no accident that the working title of the novel was, for a long time, The Zombie Woman (changed felicitously before publication because, among other things, the author liked the idea of his readers walking into a bookstore and inquiring about ‘the past of Alan Pauls’).

Is this a love story? Perhaps, insofar as it reflects the author’s understanding of love as something fundamentally “pathological.” But there is more to the novel than that. In an interview he gave after being awarded the Premio Herralde in 2003, Pauls alludes to a central tension that drives the characters’ actions:

Rímini’s politics is one of forgetting; he has decided that the only thing he can salvage is the ability to forget. Sofía, on the other hand, is a militant on the side of memory. The novel is sort of the story of that battle.

The thick roots of memory versus the flight into the future, or at least the present (Rímini never seems to have much of a plan): it is a battle in which the past ultimately emerges victorious, as we somehow suspected it must. Nonetheless, the neatness of the opposition in the author’s description of the work arouses suspicion and, ultimately, points to one of its most important and densely layered moments.

Though its protagonists may be grounded in their respective camps of present and past, the novel itself is very effective at blurring the line between the two. This is particularly evident in the various addictions and compulsions of its characters; from Sofía’s letter-writing to Vera’s compulsive jealousy to Rímini’s rituals of cocaine consumption, the movement of time is marked not by change, but by repetition. The past, rather than allowing itself to be confined to memory, forces its way through to the present.

Just as these characters are haunted by their personal histories, the novel itself is haunted by a national past. Pauls has spoken against the “fetishization” of memory, particularly the collective memory of the military dictatorship that claimed power in Argentina from 1976 to 1983 through a campaign of State-sponsored violence known as the Dirty War. And the coup and its aftereffects are, indeed, conspicuously absent from El pasado: the hermetic world of the young lovers offers few glimpses beyond its borders. Yet this past, too, is present in the novel. It emerges in its final pages as a lacuna – a menacing and expanding blind spot in Rímini’s attempts to reconstruct his history with Sofía through the thousands of photographs she has saved of the two of them.

After a manic night with the Women Who Love Too Much and a brief bout of inebriated coitus with his ex-ex-love, Rímini retires to the living room to continue cataloging the images of their shared past. He tries to pick up where he had left off – suggestively, in 1976 – but quickly discovers that he is unable to “read” the images.

He looked at ten, twenty photos and was alarmed to discover that, with the exception of the two of them – of Sofía, and of him, disfigured by time and distance but irreducible – he could not recognize anyone. Even the places in which they posed […] seemed foreign to him. The two of them were in focus, always, but all the rest […] seemed to fold in on itself, clouded over and silenced behind an opaque shroud.

Instead of offering an explicit image of the novel’s ‘other past’ that could be delimited and digested, Pauls leaves it as a space of inassimilable silence, leaving the reader with the sensation that the past is always present, whether noted or not.

Acting as a literary Rorschach test for many of its reviewers (one of whom disquietingly couched the work as a humble tribute to the superiority of women), El pasado has generated a wide range of responses. This is to its credit. It is not an easy book to read, least of all for its size: despite moments of levity, the novel exposes the darker side of the human psyche and pulls no punches in doing so. Yet for all its narrative unruliness and its occasional depravity (I mean ‘for’ as both ‘despite’ and ‘because of’), the book is pleasurably painful read, and a vital contribution to contemporary letters.